The Lost Office of Pastor 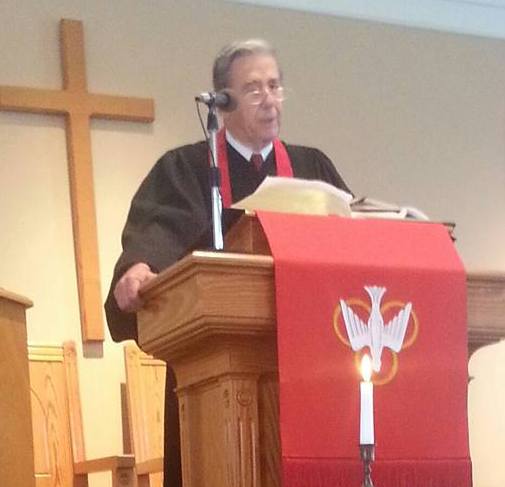 A minister called into my talk show to share his struggles while his wife cared for her dying mother and elderly father.  Identifying as a bi-vocational pastor, he commiserated on how to help his wife.  Yet his aspiration to help his wife seemed to stem from his desire to instead be helped by her.   Interrupting him, I asked: “Who’s doing the laundry?”

Protesting that he held two jobs, I waited for him to realize how poor his excuses sounded out loud.

As his voice trailed off with embarrassment, I bluntly stated, “She’s watching her mother die while caring for her father.  She needs to come home to a clean house with laundry that’s washed, folded, and put away.  She also needs a well-stocked pantry, a nice meal, and a clean kitchen.   While you’re at it, clean the bathroom by her standards not yours. Furthermore, she needs to sleep in a freshly made bed without the Marvin Gaye music playing – if you know what I mean.”

Boring in, I challenged him further.  “If you care for her in this manner without expecting anything in return, you will gain a greater understanding of how our Savior loves His bride.  You’ll preach differently, and it will change your congregation. In turn, they will change the community.  But it starts with you learning to love and pastor sacrificially in your home.”

Sometimes, the best pastoral training starts in the laundry room.

The office of minister seems to have decentralized and “pastor” is used more as a noun than a verb.   All too many view clergy as 20-minute inspirational speakers. They’re the ones who baptize, marry, or bury loved ones (Hatch ‘em, Match ‘em, & Dispatch ‘em.).  Yet the office of pastor extends far beyond ceremonies and even the pulpit.  Pastors get calls in the middle of the night from an individual or family in crisis.  Adultery, tragedy, drugs, alcohol, crime—whatever the vice or heartache, a pastor gets the call.  Caring for human beings can be complex and painful.

When running for President in 2008, the debate moderator asked Governor Mike Huckabee about his qualifications to run.  Although most by that time clearly knew the Governor’s two terms in the Arkansas capital (and the moderator even addressed him as “Governor”), Huckabee provides a surprising response.

“As a pastor, I’ve had a front-row seat to virtually every social dynamic faced by families.” He went on to detail his pastoral experience with such things as healthcare, unemployment, drug addiction, poverty, death, and a host of other issues encountered by pastors – but not necessarily preachers.

Large pulpits and crowd-friendly messages can leave little time or desire for “rolled-up sleeve” issues that cripple individuals and families.  Yet, dealing directing with those painful issues evidently left a profound impact on Governor Huckabee that stretched far beyond the local church.  One could even say the impact reached to the White House briefing room through the Governor’s high-profile daughter, White House Press Secretary Sarah Sanders for President Trump.

Franklin Graham once aptly said about his ministry, Samaritan’s Purse: “It’s not the kind of ministry one can run from behind a desk.  You have to get out there and smell it.

Poverty and affliction have their own smells.  Touching, embracing, and weeping with the wounded—however those wounds manifest—remains our highest callings as Christians.  Christ stated His expectations clearly in Matthew 25:35-40 by addressing six core areas of ministry for all believers:  hunger, thirst, welcoming a stranger, clothing the naked, visiting the sick, and visiting the prisoner.

While appropriate and necessary to delegate some of these tasks, one should scrutinize ministers who remain detached and fail to model hands-on ministry.  This also applies to ordained leaders and elders in the church.  In a recent and heated meeting of elders during a painful church conflict, one elder blurted out, “I didn’t sign up for this!”

Yes, he did.  Both he and the one who trained him share the blame for his ignorance.

The minister aids in defining the culture of the local church.  Those living with a loved one with a disability learn that the family can only move at the speed of the slowest member.  Does the local church operate in that manner?  In Luke 14, Jesus shares the model of inviting the “…poor and crippled and blind and lame” to the feast.  Are individuals and families living with those type of issues welcomed and engaged by the pastor at your local church?

Now more than ever, the world needs pastors who personally embrace the suffering and heart-wrenching conditions that caused our Savior himself to groan.  Although he delegated, Christ never outsourced touching the wounded.  He’s not looking for gilded pulpits, backdrops of world-class musicians or towering cathedrals, but instead seeks compassionate servants.

Christ models the office of pastor and expects us to do the same.

Peter Rosenberger has served as a caregiver for his wife, Gracie, through a medical nightmare spanning 35 years. He hosts a national radio program for family caregivers.

Peter’s father has served as a pastor for sixty years.